When the ministry that I had been a part of decided to close the doors on their outreach program, several of the volunteers and I determined to continue the outreach. There was just one problem ..... We had no clue on where to even begin.

That is when the Logos Global Network entered the picture.  Two LGN members, Dr. Shirley Wood and Christine Manders,  attended our initial meeting to discuss ideas of what this may look like. We had only thought we would be a small group doing outreach on our own until Dr. Shirley suggested we become a registered 501C3 Non Profit. This is when Sufficient Grace Outreach was born.

Dr. Shirley and Christine along with LGN, helped us with the paperwork and the action plan on becoming a registered not-for-profit entity with the IRS.  We didn't have the necessary funding at that time to get our own 501C3 status. So the Logos Global Network stepped in and let the Sufficient Grace Outreach be covered underneath their 501C3 group status until we were able to get our own. This helped SGO out so much. 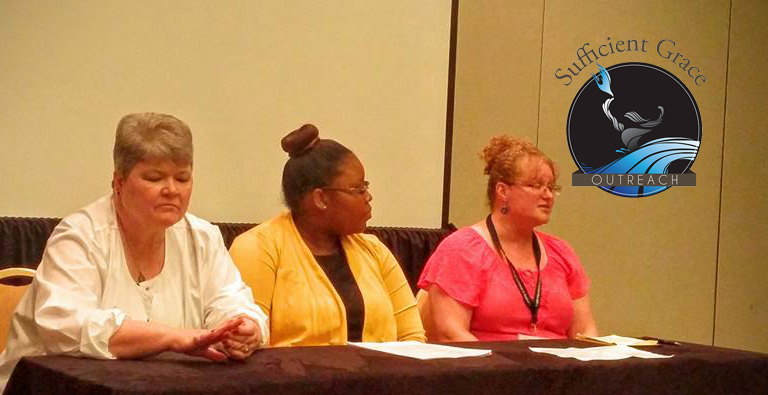 Being recognized as a 501C3 allowed us to give tax-benefits to our donors; and we started getting more and more donations and support. God is using the Logos Global Network to help ordinary individuals like our volunteers and me to be the hands and feet of Jesus top hurting people.

We continue to have LGN's support of our ministry today, after almost 5 years of ministry. Thank you LGN! You are making a difference in the lives of many! You truly enable ministry, missions and education.

Sufficient Grace Outreach, Inc. in Asheville, NC is organized for the specific purpose of outreach to women and/or children involved in human trafficking; but does not limit their reach to this demographic, realizing that the plight of victims of human trafficking is not limited to women and/or children. Sufficient Grace will reach out to anyone regardless of race, gender, or creed in order to help them achieve freedom and safety. As opportunity and need arises, Sufficient Grace Outreach Inc will expand its reach to anyone it finds in need.

Human Trafficking happens here in the US, in our very own backyards not just overseas. At least 100,000 American children are being exploited through pornography or prostitution every year (Shared Hope International) and are trafficking victims between the ages of 12-17 years old. These are our daughters, nieces, friends, family, and neighbors. Traffickers take pictures of these children and post them on various websites, lying about their age (you have to be 18 and older to post ads). This is how they sell these children.