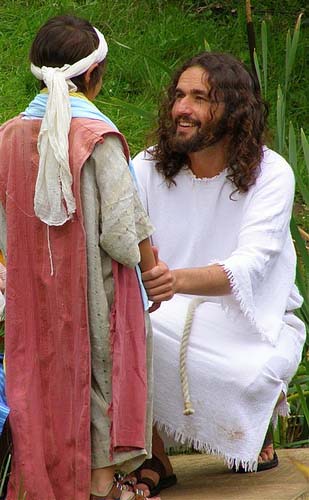 The Power of a Single Question

I've recently been introduced to an amazing insight. It's actually so simple that I can't believe I hadn't thought of it before. And yet, this one little insight has totally revolutionized the way I've been interacting with almost everyone for the last few weeks.

If you ask anyone the following question, they answer it with pleasure:

"If I were to pray something for you personally, what would it be?"

Since Colin C. Millar from Igniting Prayer Action shared that question with me  and a few close friends last week, I've asked the question to strangers as we stand in a line, people on an airplane, restaurant workers, bus drivers, hotel housekeeping staff, phlebotomists, tour guides, desk clerks and a large assortment of people in the widest variety of situations that you might imagine.  The amazing thing is that no one has said they don't want to be prayed for! Nope. Not one person has declined.

A waitress in a restaurant me to pray for her financial situation. A customer service worker at a newspaper asked for prayer for her son. Quite a few people have asked for prayer with regard to health issues. Here's an amazing story I can share about asking the question.

I was in a hotel in South Carolina last week, and was returning to my room to gather my belongings before checking out. As I walked down the hallway I saw two large, strong gentlemen who worked at the hotel. They were waiting to clean my room, as I was the last room on their list. As I came to the door, we struck up a conversation; and then I asked the question.

"Hey guys, if I were to pray something for each of you personally, what would it be?"

The man on the left responded immediately and said, "I'm in a very tough custody battle for my son. would you pray about that?" So I prayed for the situation, asking Jesus to intervene and bring the best resolution.  As I was finishing my prayer, a third housekeeper came out of an adjacent room asking, "Hey, do I hear somebody praying out here?" When I asked her the question, she looked me in the eyes and said, "If you're a man of God, you'll know what to pray!" She then reached out, taking both my hands in hers. I prayed as the Lord led.

I turned to the final man and asked him what I should pray for. He paused for a second, and then  said, "Just pray what God shows you." So I asked the Lord to show me how to pray, and the Holy Spirit took over.  "I'm not the first person that God has brought along your path, brother. In fact, He's sent several people to you recently to get your attention." At this point his eyes were as big as saucers, and he began to ask me, "How could you possibly know ....." But I wasn't stopping to answer questions,  I kept speaking and said, "Your problem is that you don't trust God, my friend.  You're trying to get through the right doors, but you're afraid to trust Him to lead you. God wants you to know that the doors you need opened will not be opened without His help.  So if you want me to pray for you, I'm going to pray that you'll come to the place where you'll finally begin to trust God, let Him into your life and let Him be Lord.  So, do you still want me to pray?"

Well, he still wanted me to pray so while the four of us stood in the hallway, I asked the Lord to draw him into a relationship of faith and trust.

My friend Bill and I asked the question, and then were able to pray with the front desk clerk of the hotel this evening as we were checking in. As we got into the elevator to head up to our rooms, he was as "pumped" as I was about the numerous opportunities for prayer we've seen since learning the question last week. He said, "Can you imagine what would happen if Christians all over the world would just start asking people the question?"

Imagine!  The question is so simple anyone can ask it; and yet so powerful anyone can be touched by it.  It allows people to see your faith in a non-threatening and personal way.  It draws them closer to God, and brings His Kingdom into contact with their lives.

So, here's my challenge.

ASK SOMEONE THE QUESTION.

Do it today.  Just one person.  You're about to be amazed. You'll want to ask another person, and then another. You're going to be utterly astounded by the way everyone opens up to you and lets you pray for them!

Then please do us all a favor. Come back here and post your story as an encouragement to others.  Also, share the link to this article with your friends so they can be amazed by all that God does.  When they do, they'll start asking people the question too.

Let your light shine.  Ask someone the question today.